The Societas Rosicruciana in Civitatibus Foederatis is a Rosicrucian Society based in the United States of America extending from its formation of a Grand High Council on April 21st, 1880 and its official consecration on September 21, 1880, by three Colleges chartered by the Societas Rosicruciana In Scotia.[1] High Grade Christian Freemasons in the United States in search of the Classical Rosicrucian Society for Masons in the United Kingdom became interested in organizing a similar body in the United States and did so under Scotland’s authority (Societas Rosicruciana In Scotia) with the help of Most Worthy Charles Matier of the SRIS, as early as 1873[2].  This effort died out two years later under the care of R.W. Frater George S. Blackie VIII and was then re-chartered by the SRIS later again in 1878. Dr. Jonathon J. French[3] was a IX grade head of the Rosicrucian Society of the United States & opened the Matier Royal Provincial College with a charter from Lord Inverurie, Earl of Kincore and Supreme Magus of the SRIS.  The college was named after Charles Fitzgerald Matier, the first Supreme Magus of SRIS who served in 1876.   Harold Van Buren Voorhis insists that the Illinois College under Dr. French was never truly active, and it certainly was short-lived as Dr. French died an untimely death in 1879.  Harold Voorhis also insisted that Frater Stodart Blackie’s early charter in New York had been nothing more than an unsubstantiated rumor.  It has since been established as historical fact.

In 1878 a group of senior U.S. Masons (Daniel Sutter, and Charles W. Parker) led by Charles E. Meyer (1839-1908) of Pennsylvania traveled to England and on July 25th, 1878 were initiated into the grade of Zelator at Yorkshire College at Sheffield[4]. They applied for a charter, but getting no response, turned to Scotland and received a charter from the college in Edinburgh in 1879.  Scotland’s Society is actually the oldest as Walter Spencer is recorded as having been initiated into the SRIS by Anthony Oneil Haye in 1857, and there are documents in the SRIA archives that show that both Robert Wentworth Little and William J. Hughan were initiated in 1866 & 1867 by Anthony O’Neal Haye, Magus Max, Ros. Soc. Scot. With H.H.M. Bairnfathur signing as Secretary.  The Societas Rosicruciana in Anglia[5] was formed in England in 1866 by Robert Wentworth Little.  The SRIA later felt the need to charter the current SRIS on October 24, 1873.[6]

A second charter was granted by the SRIS for a college in New York, and Fratres from Philadelphia and New York met in Philadelphia on April 21, 1880 and formed a High Council, then known as the SRRCA or the Societas Rosicrucianae Reipublica Confoedera America, was later changed to the Society of Rosicrucians in the USA by Most Worthy Frater Shryock in his capacity as Supreme Magus and then properly Latinized in 1934 by & at the suggestion of Dr. William Moseley Brown under the regime of Most Worthy Frater Hamilton.  Brown composed the name (Societas Rosicruciana In Civitatibus Foederatis)  himself and submitted it on January 17th, 1934.  The SRICF has operated continuously since its formation in the 19th Century, and is thriving today with an upsurge of young Masons being invited into its ranks with great enthusiasm and demonstrated scholarship.

Membership is by invitation only & predicated on regular mainstream Masonic affiliation as well as a profession of Christian faith.  Membership was initially restricted to 36 members per College, but this was changed in 1908 by MW Thomas Shryock to 72 members per college.  The See of the High Council is in Washington, D.C.   The SRICF is in amity with the SRIS (Scotia) and the SRIA (Anglia) as well as the SRIC (Canada) and has helped the cause of Rosicruciana by empowering High Councils in their own sovereignty around the World.  They are: the SRIL in Lusitania (Portugal), SRIG in Gallia (France) & the SRIR (Romania).

The society issues an annual journal known as Ad Lucem composed of academic articles on things related to Rosicrucianism & esoteric streams of Christian Mysteries.  There is also an annual report, The Rosicrucian Fama.  Many of the Colleges have their own individual organs[7] which are produced quarterly as well as annually. The governing body of the Society is known since 1911 (having dropped ‘Grand’ from its title) as The High Council which is composed of Fratres of the Third Order (IX and VIII), plus any College Celebrant not a member of the Third Order. The head of the Society is titled The Supreme Magus who was elected ad vitam up until circa 1991 when the constitution of the Society was changed to reflect that Supreme Magi are elected each triennium.  Unlike the SRIA in England, a Chief Adept in the SRICF does not have regional powers, but rather is in charge of an individual College.  Typically there is but one College per state, exceptions having been made for both New York and California due to their size and population. 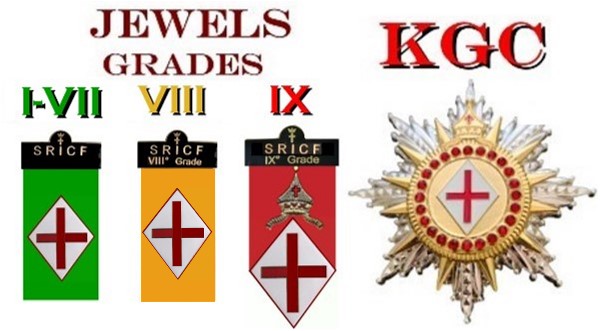 KGC~ Knight Grand Crosses are awarded to IX grade Magi for exemplary effort in the work of the Society & Rosicrucianism in general.

REFERENCES:
[1] Scotland chartered the Pennsylvania College on Dec. 27, 1879. This was followed by charters being issued to New York on April 9, 1880, Massachusetts on May 4, 1880
[2] Dr. George S. Blackie VIII given charter by Matier, SM of the SRIS, for a College in NYC (source: Bruce Wilson)
[3] March 17th, 1879 letter to Sir John O. Dominis, Governor of Oahu, Hawaiian Kingdom.
[4] Mark Merckle also of PA was admitted to Metropolitan College
[5] Among its members were Kenneth R. H. Mackenzie, Dr. William Wynn Westcott (an honorary Magus of the SRICF) and W. R. Woodman, who were among the founders of the Hermetic Order of the Golden Dawn
[6] charter was issued by the SRIA to form East of Scotland College in Edinburgh. This college was renamed Metropolitan College in 1874.
The High Council of SRIS was constituted ion January 13th, 1876.
[7] Ex-LI College in NYC, North Carolina Louisiana College all title their publication as LVX
The jewel is a miter from which is suspended a red ribbon and jewel.